In my drawings on the theme of nightmare, I deal with a touch that crosses one’s personal boundaries and the fear that it causes. I want to represent the blurring of limits and the distortion of physical or mental contact in interaction between people. Even a harmless looking nuisance is serious, because every being has the right to integrity. An unclear initial setting makes it possible to hurt someone in an insidious manner. Overwhelmed with fear, the victim of violence stiffens, which makes the situation all the more dangerous. Perceiving one’s own boundaries and defending them is an essential way to overcome fear.

One can also escape from another one’s grip, whenever it is possible. From a different point of view, my works represent the experience of fear towards oneself and its halting impact. Confronting and fighting that fear is more helpful than escaping from it.

“Wake-up” has a very similar composition than “Nightmare” but it was made almost a year later. Together, they tell about a phenomenon called sleep paralysis. A person experiencing it can open their eyes, see and be concious about their surroundings, but they can’t move their limbs. If ever another person notices it, a very strong hold will help them wake up. A light touch instead will only make them feel worse. 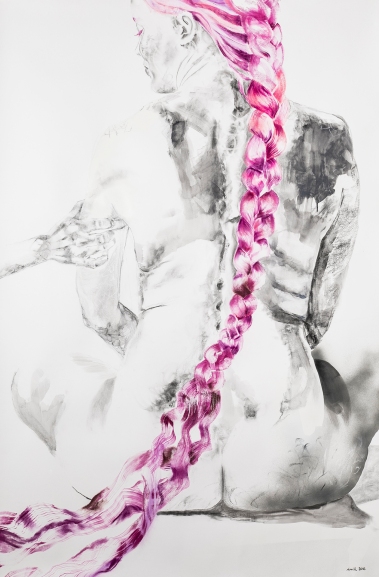 “Away” continues the theme of nightmare, but there is a different approach than in the pieces from 2015. Here, the idea of getting up and leaving the situation is present.

“Escape” was also made after the exhibition “After a Nightmare”. Here, the person doesn’t want to face the object of her fear but chooses ignorance instead.

You can buy my artworks in Taiko, the webstore for finnish art

You can order my artworks also in Find Art Globally

This is a text widget. The Text Widget allows you to add text or HTML to your sidebar. You can use a text widget to display text, links, images, HTML, or a combination of these. Edit them in the Widget section of the Customizer.